Sorry! You missed Bad Religion and Alkaline Trio at The Fillmore 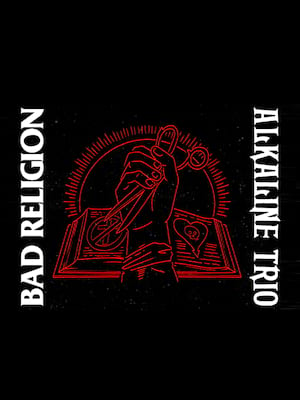 Cali punk veterans Bad Religion and Chicago punk heroes Alkaline Trio are plotting a co-headline North American tour in the spring of 2020. The hotly anticipated jaunt not only brings together the Epitaph record label mates for the first time, but commemorates Bad Religion's 40th anniversary as a band. One of the most consistent and pivotal forces in the history of punk, their 17 albums attest to a celebrated legacy based on politically charged lyrics and over five million albums sold worldwide.

Citing Bad Religion as one of the reasons they started making music in the first place, Alkaline Trio were formed 16 years after the cult hit rockers, but continue to fly the same flag. Drummer Matt Skiba has recently split his rhythmic duties between Alkaline Trio and Blink 182, but the group's outfit remains prolific - their most recent LP Is This Thing Cursed? was released in the Summer of 2018 to much critical acclaim.

Seen Bad Religion and Alkaline Trio? Loved it? Hated it?

Sound good to you? Share this page on social media and let your friends know about Bad Religion and Alkaline Trio at The Fillmore.