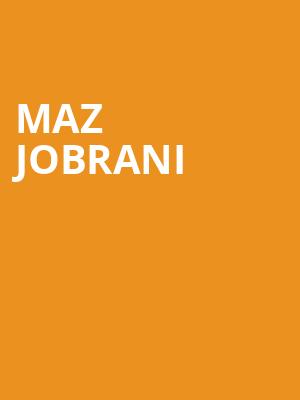 When it comes to supplying laughs, Iranian-American comedian Maz Jobrani enjoys his share of racial banter.... he delivers jokes rooted in his own heritage, mixing in jabs at his family, upbringing, even audience members.

The Persian Pink Panther takes to the stage

Maz Jobrani is also known as the Persian Pink Panther, a cheeky reference to his Iranian-Persian heritage. A well-tread comedian, he's performed comedy in almost every medium with roles on radio shows, TV sitcoms, talk shows, feature films, and at comedy clubs. If you recognise his face it could be pretty hard to track down where you remember him from! Perhaps a night watching him perform live on-stage will jog your memory.

Jobrani moved to the USA from Iran when he was just a kid, and abandoned his PhD studies at UCLA to pursue his dream of being an actor - a move that has served him well with today's current affairs providing a wealth of topics for his race, culture and identity themed routines. He's even part of a comedy tour called the 'Axis of Evil Tour' - a tongue in cheek (or perhaps downright blatant) reference to the media's often very skewed coverage of Middle Eastern cultures.

Sound good to you? Share this page on social media and let your friends know about Maz Jobrani at Motorcity Casino Hotel.