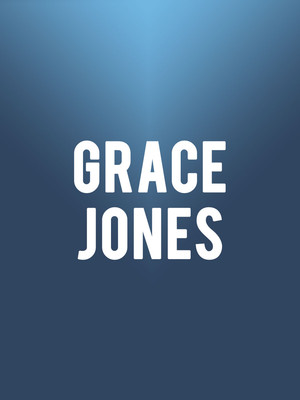 A lifelong provocateur, she has an unfailing ability to perform and retains the kind of energy that allows her to hula-hoop for 20 minutes straight while singing Slave to the Rhythm

Grace Jones Performs In Detroit For One Night Only

A chance to see the Glamazonian force of nature that is Grace Jones on stage in full battle regalia is a rarefied thing indeed, so don't miss the Jamaican-born, New York-raised pop phenomenon when she performs in Detroit for the first time since 1990! Originally turning heads thanks to her razor sharp cheek bones and flamboyant style, Jones was a natural fit for a pop star and graduated from modelling to music with the release of her debut album 'Portfolio' and breakthrough hit 'La Vie En Rose' in 1977.

Quickly taking over the American disco club scene, Jones garnered a reputation for dazzling live shows that stemmed from her outrageous, unapologetic style. Over the course of ten genre-defying albums, she broke into the mainstream thanks to smash hit singles like 'Slave To The Rhythm', 'Pull Up To The Bumper' and 'Do Or Die', as well as roles in films including '007: A View To Kill' and 'Conan The Destroyer'. Known for high value, theatrical productions as big as her personality, a Grace Jones concert is simply not to be missed.

Sound good to you? Share this page on social media and let your friends know about Grace Jones at Masonic Temple Theatre.