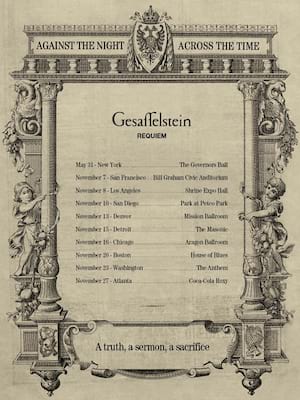 After wowing festival-goers at the 2019 Coachella festival French DJ Gesaffelstein is heading out on tour this fall! The Requiem tour will see the EDM master hit eleven cities in this much-anticipated tour. Boasting to be his 'darkest' and most 'sonically stunning' show so far, Requiem will feature some magical theatrics (for which Gesaffelstein has become known for) including an outfit made from Vantablack VBx2, the darkest substance currently known to the human race...

Having worked with the likes of Kanye West, Pharell Williams, The Weeknd and Daft Punk Gesaffelstein has quickly become one of the globe's most sought after DJs and producers. With two studio albums and 9 EP's Gesaffelstein's work aims to blend a whole host of musical genre's and artistic forms to create a totally unique sonic experience.

Not just a feast for ears but also a feast for the eyes don't miss your chance to see Gesaffelstein live!

Seen Gesaffelstein? Loved it? Hated it?

Sound good to you? Share this page on social media and let your friends know about Gesaffelstein at Masonic Temple Theatre.