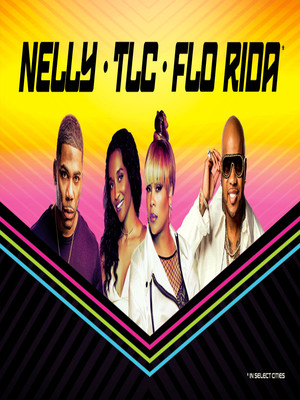 Nelly with TLC and Flo Rida

Fans can expect an incredible, non-stop party with each artist delivering hit after hit all night long.

Why See Nelly with TLC and Flo Rida?

Rapper Nelly will combine his talents with fellow rapper Flo Rida and 00's group TLC for a tour hitting 21 dates across the country. Kicking off in Tuscaloosa, Alabama, the tour comes at a time just after TLC's 20th anniversary of their 1999 LP 'FanMail' which saw them shoot to fame. Nelly has been prominent in the music scene ever since his solo debut 'Country Grammar' in 2000 and Flo Rida broke records with his hit single 'Low' in 2008.

The artists will be hitting states including Atlanta, Chicago, Houston and Detroit giving fans a thrilling and nostalgic experience.

Shows will be jammed packed with hits and the tour will be a continuous 00's party.

The Come Up Show Used under Creative Commons License

It was Awesome!!!! All three groups gave 💯 percent. The energy was awesome.... more

Sound good to you? Share this page on social media and let your friends know about Nelly with TLC and Flo Rida at DTE Energy Music Center.