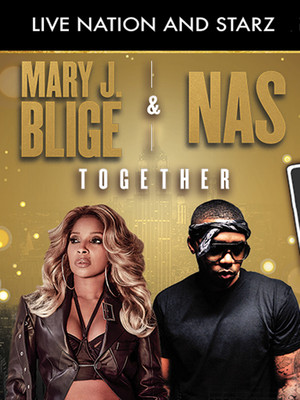 Two legendary artists come together on one stage!

Mary J. Blige and Nas are no strangers to one another, they've collaborated together for decades. But fans will be excited to hear that they are coming together for their first ever co-headlining tour! The legendary rapper and queen of hip-hop will be performing across the country, including Atlanta, Boston, Houston and many more! Starting July 11 and currently slated to run until the fall.

Blige hasn't been on the road since her 2017 tour, Strength of a Woman. During her career, selling over 80 million records, Blige has released 13 studio albums, eight of which reached multi-platinum status worldwide. She's won nine Grammy Awards, twelve Billboard Music Awards, four American Music Awards and received three nods for the Golden Globes.

Following his triumphant Red Rock show last year, Nas brings with him eight consecutive platinum and multi-platinum albums, which have sold over 30 million records worldwide. He's ranked within the top 5 of MTVs 'Greatest MCs of All Time'. He was also ranked at #2 on 'Top 50 Lyricists of All Time' and was featured on Billboards, 'The 10 Best Rappers Of All Time'.

Make sure you don't miss these two legends on one stage! It could be a once in a lifetime opportunity.

Sound good to you? Share this page on social media and let your friends know about Mary J Blige and Nas at DTE Energy Music Center.