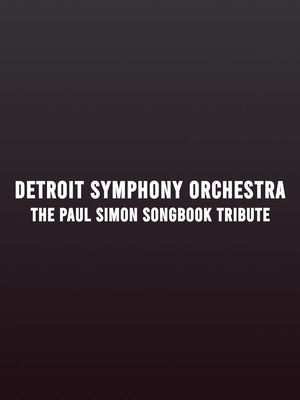 The Detroit Symphony Orchestra knows how to throw a party

In a career spanning over 50 years, Paul Simon has produced an enormous catalogue of culture-defining music for the world with both Simon & Garfunkel and as a solo performer. This November the Detroit Symphony Orchestra perform a fitting tribute to a true legend at Detroit's Orchestra Hall. Songs performed include timeless hits such as 'Graceland', 'Bridge Over Troubled Water', 'Me and Julio Down By The Schoolyard', '50 Ways To Leave Your Lover' and 'The Sound of Silence'.

The Paul Simon Songbook Tribute is orchestrated by DSO's own principal pops conductor Jeff Tyzik, whose past work includes critically acclaimed orchestrations of Beatles hits, Duke Ellington suites and funk & soul classics. His decorated career as a musician, conductor, composer and arranger has seen him work with The Tonight Show Band, Rochester Philharmonic and the Seattle Symphony among many others, earning a Grammy in 1987 for The Tonight Show Band with Doc Severinsen.