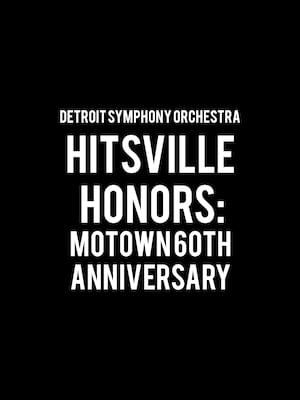 It's a celebration of pop's greatest label, and you can't celebrate that without paying tribute to Gordy.

Berry Gordy tried many careers in his extraordinary life, including boxer, assembly line worker and US Army soldier. But the career he will be most remembered for is his vocation as the founder of Motown Records, becoming one of the entertainment industry's most influential figures. Celebrating 60 years of Motown and the considerable contributions of the man behind the rise of the distinctive R&B, soul and funk-tinged sound, the Houston Symphony presents the Hitsville Honors.

A one-night-only concert featuring the likes of Motown icons the Temptations, Four Tops, Martha Reeves and Mary Wilson, as well as contemporary performers Big Sean, Kem, Ne-Yo and a rumoured surprise guest, the Hittsville Honors not only pays tribute to Berry Gordy's far-reaching legacy, but the Motown artists themselves during a programme of the record label's greatest hits.