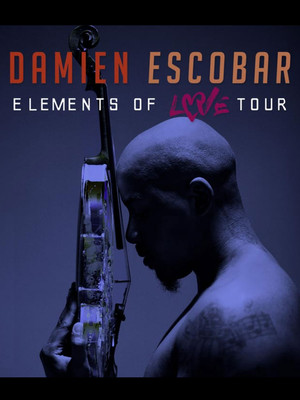 Damien is a master of his craft. He mixes genres like jazz, classical and hip-hop effortlessly. His covers are made his own.

It's very rare that lightening strikes twice in the entertainment industry. But two-time Emmy Award-winning violinist Damien Escobar is living proof that talent overcomes all odds. Rapidly rising to international fame as part of hip hop classical fusion duo Nuttin' But Stringz, whose appearance on America's Got Talent opened the door to commercials, movies and platinum-certified success, Escobar refused to fade away when creative differences got the better of the group.

Going solo the same year of Nuttin' But Stringz break-up in 2012, Escobar released his R&B tinged debut album Sensual Melodies and started touring under his own steam just a year later. No stranger to performing for the likes of Barack Obama and Oprah, his heady blend of jazz, R&B, pop and hip hop makes for a dynamic stage performance - don't miss him when he hits the road on his latest Elements Of Love Tour.

Sound good to you? Share this page on social media and let your friends know about Aretha Jazz Series: Damien Escobar at Aretha Franklin Amphitheatre.