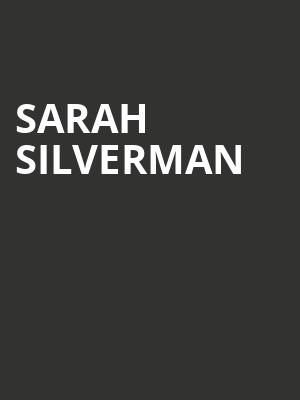 One of the biggest names in American comedy!

One of the biggest names in American comedy, Sarah Silverman may have become known for her no-holds barred exploration of taboo subjects, but underneath all that controversy there lives an incisive and brave performer. She rose through the stand-up ranks in the 00s, and created her own eponymous Comedy Central show together with Community mastermind Dan Harmon. Be warned though - no subject is taboo for this leading comedian who Amy Schumer cites as one of her influences. Catch her when she performs live on her Grow Some Lips tour!

No stranger to the stage or screen, she's also appeared on Saturday Night Live and in numerous films such as School of Rock, A Million Ways To Die In The West and Wreck-It Ralph, as well as the recent I Smile Back, which was a showcase for her considerable dramatic range.

She was funny , sharp , not too political All seats are good Great drink... more

Sound good to you? Share this page on social media and let your friends know about Sarah Silverman at The Fillmore.