Sorry! You missed Pee-wee's Big Adventure - Film at The Fillmore 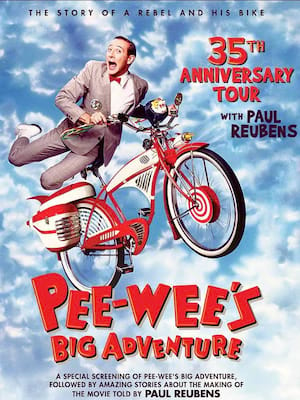 Together, Burton and Herman make use of every type of screen comedy - verbal, visual, slapstick, sexual, even cartoon - in a film which holds as many delights for adults as for their offspring.

Pee-Wee Hits The Road Once More

What do you get when you cross the left-field vision of Tim Burton with the impish, bow tie-wearing pop culture icon Pee-Wee Herman? Why the ultimate off-kilter road movie of course! Celebrating the 35th anniversary of Pee-Wee Herman's Big Adventure, the character's creator and celebrated comedian Paul Reubens brings his alter ego back into the spotlight during a series of special screenings and discussions this winter.

Released in 1985, the cult hit feature capitalised on a stage act turned HBO special in 1981. Two TV series quickly followed and immortalised Reubens' memorable alter ego. A surprise hit, the film proved an endlessly quotable family movie filled with grown-up moments and one-liners, all hitting home thanks to the sharply dressed man-child at the story's center. Don't miss this chance peer inside Reubens' mind during an audience Q&A after watching the film.

Rich Evirs: “Ride the Time Tunnel Back to the Mid 80's with Paul Reubens as your guide!”

Had the great fortune to attend the kickoff the 35th anniversary of the... more

Sound good to you? Share this page on social media and let your friends know about Pee-wee's Big Adventure - Film at The Fillmore.