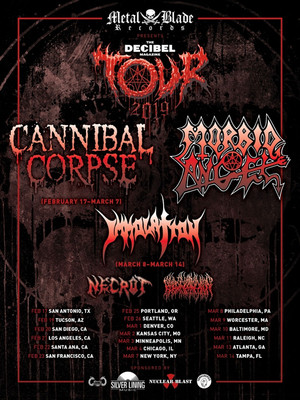 When Cannibal Corpse emerged in the late '80s, their music was some of the most extreme and brutal many people had ever heard, and they were pioneers in the death metal genre.

New York death metal band Cannibal Corpse have managed to avoid being in the spotlight even though they have released an amazing 14 albums and have been rightfully labelled as pioneers of the death metal genre. Cannibal Corpse benefit from having a dedicated cult following which they've retained through their strong image and cohesive extreme metal music. Early this year, the band will head on tour.

The band delve into horror through their music and commonly speak about killing people. This has led them to getting into certain controversies and legal problems. However, the band's strong theme and sense of who they are has led to their success and they are the biggest selling death metal band of all time.

14 albums later and Cannibal Corpse still dominate their genre and have tons of devoted fans anticipating their next move.

Sound good to you? Share this page on social media and let your friends know about Cannibal Corpse at Saint Andrews Hall.