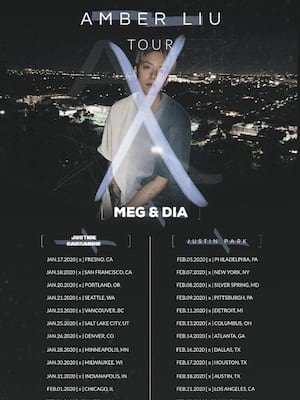 In September 2019, f(x) member Amber Liu announced her split from the K-Pop girl band phenomenon and South Korean mega label SM Entertainment. Focusing on her already blossoming solo career, she released her latest single 'Other People' in November 2019 and has her sight set on US shores in early 2020, where she'll be headed out on her X North American Tour.

The tour coincides with the release of her forthcoming album of the same name. An intimate record that delves into her personal stories, complex emotions and reaction to her time spent in the K-Pop hit machine, X marks the 10 year anniversary of Liu's career in music but announces a brand new chapter to the world. Rock sisters Meg & Dia, social media turned music sensation Justice Carradine and Korean American R&B crooner Justin Park join her for select dates on the tour.

Sound good to you? Share this page on social media and let your friends know about Amber Liu at Saint Andrews Hall.