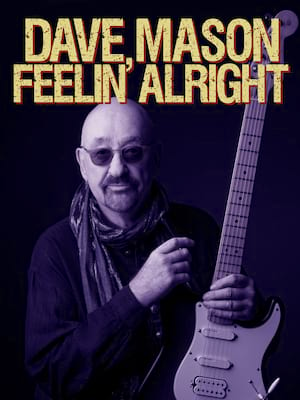 The music performed by this Rock and Roll Hall of Fame artist is timeless and resonates deeply with his fans.

British singer and songwriter Dave Mason performs his absolute best and electrifying rock hits on his tour across America. Combining songs that he has sung on stage to excited audiences for the last 50 years, Mason enters 2020 with a thrilling showcase of his best and most inspiring work to date.

Mason first gained the musical spotlight with the band Traffic before becoming a solo artist. Over the course of his career, the singer has been inducted into the Rock and Roll Hall of Fame and collaborated with some of the industry's most supreme talents including Michael Jackson, Jimi Hendrix, Paul McCartney and Stevie Wonder.

Make sure you don't miss the chance to see Dave Mason live, whether it be alongside special guests or as a solo act - this is a concert you don't want to miss out on!

The great Dave Mason and his band were awesome! Adding Steve Cropper was... more

Anonymous: “The instruments were much too loud... couldn't hear Dave's voice”

Dave Mason is and way amazing but it would be a much nicer experience if... more

Sound good to you? Share this page on social media and let your friends know about Dave Mason at Motorcity Casino Hotel.