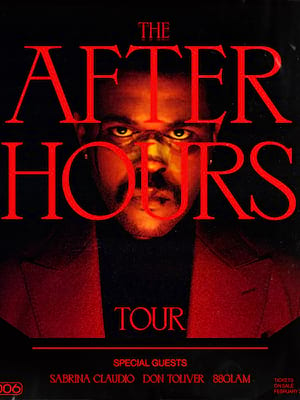 ...everyone is craning to see the Weeknd, whose sheer exuberance is far from the solemn character of his records. His transition from solipsist soul boy to charismatic showman is striking.

Why See The Weeknd?

the after hours tour

Canadian singer-songwriter and producer Abel Tesfaye, aka The Weeknd, represents the R&B new school - a new brand of pop-orientated hip hop that's characterized by a unique creative vision and a musicality so ambitious it would put Kanye to shame. This year sees The Weeknd hitting the road in support of his upcoming album, 'After Hours' which includes the hit new single 'Blinding Lights'. The After Hours tour will also feature one of The Weeknd's most innovative stage designs to date, where it will also contain the most LED lights that an arena show as even seen.

The Weeknd first released a few DIY mixtapes before finding him in the world's spotlight with his full-length debut Kiss Land in 2013. With a distinctive falsetto that glides swiftly and subtly over rolling synth-scapes punctuated with heavy, groovy bass lines, the charismatic muso recalls Michael Jackson in his prime.

The Weeknd was lit as hell!!! Abel was electrified , played every hit that... more

The show started on time opening acts where great The Weeknd was hype... more

Sound good to you? Share this page on social media and let your friends know about The Weeknd at Little Caesars Arena.