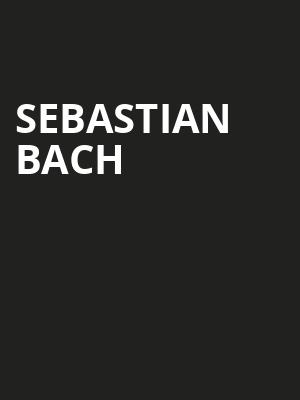 The name Sebastian Bach may call to mind delightful Baroque interludes and powdered wigs, but during the 1980s a hair rocker with long blonde locks, rebellious attitude and growling, powerhouse vocals rose to prominence and claimed the name for himself. Don't miss the iconic Canadian singer-songwriter as he hits the North American road to celebrate the 31st anniversary of his band Skid Row's self-titled debut album, performing the landmark metal offering its in entirety.

Bach is perhaps best known as the frontman of Skid Row, the heavy metal outfit that made him a household name during its initial tenure between 1986 and 1996. Leaving to pursue solo ambitions, Bach not only released three of his own albums but wound up on Broadway in productions of The Rocky Horror Picture Show and Jekyll & Hyde, as well as in front of the camera with a cameo role in cult hit TV series Gilmore Girls. Don't miss out when he returns to his rock and roll roots!

Sound good to you? Share this page on social media and let your friends know about Sebastian Bach at Harpos Concert Theater.