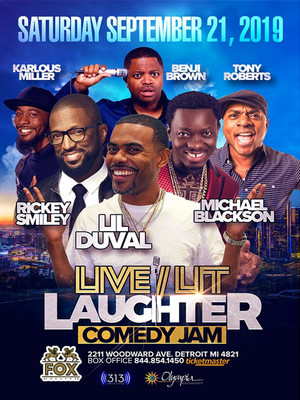 Back for another year, the Live, Lit and Laughter Comedy Jam comes to Detroit's Fox Theatre and is full of laughs, with a line up boasting hilarious comedians. Lil Duval, Michael Blackson, Tony Roberts, Karlous Miller and Rickey Smiley will all hit the stage and woo audiences with their hysterical tales.

Michael Blackson has been a recognisable face in the comedy circuit ever since his role in 2000 comedy 'Next Friday.' The actor and comedian makes audiences cry laughing during his stand-up shows and has been hailed 'The African King of Comedy' due to his Ghanian roots.

Lil Duval first showcased his comedic skill on BET's 2005 comedy competition 'Coming to the Stage' where he finished as a finalist. He went on to work with MTV and hosted comedy video clip show 'Ain't That America.'

Sound good to you? Share this page on social media and let your friends know about Live, Lit and Laughter Comedy Jam at Fox Theatre.