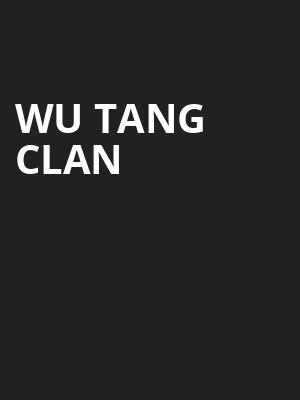 Hip-hop legends back on stage together.

one of the greatest hip hop groups of all time!

Hailed as one of the most influential hip-hop groups of all time, Wu-Tang Clan have been at the forefront of their game since their debut album, which is considered one of the greatest hip hop albums of all time. Celebrate over 25 years of the album, as the super-group head out tour! Make sure you don't miss the living legends live when they come to a city near you!

With a further six-albums now under their belt the Wu-Tang Clan can boast as being one of the most influential hip-hop groups of all time. With a member list that would leave So Solid Crew jealous, Wu-Tang continue to make music history. From achieving four gold and platinum status albums to the release of Once Upon a Time in Shaolin, which was only pressed once and sold to the highest bidder for $2 million in 2015, Wu-Tang Clan are the unrivaled Kings of Hip-Hop!

Sound good to you? Share this page on social media and let your friends know about Wu Tang Clan at Detroit Symphony Orchestra Hall.