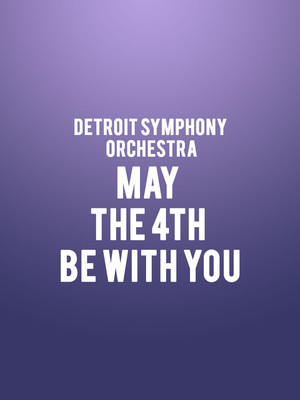 Detroit Symphony Orchestra - May the 4th Be with You

Why See Detroit Symphony Orchestra - May the 4th Be with You?

A relatively short time ago (if you take into account the age of our young planet in the celestial scheme of things) in a galaxy not far away at all, an epic space opera began its journey into pop culture legend with the release of the first Star Wars film in 1977. Forty-two years and almost eight films later (the hotly anticipated 'Episode IX' is due for release in the winter of 2019), the iconic adventures of Luke, Leia, Han, Chewie, C-3PO and R2-D2 are celebrated every year on May the 4th.

What started out as a witty pun shared by fans in reference to the Jedi adage 'May the Force be with you' became a full blown Star Wars holiday as it caught on like wild fire in the media as a meme and a grass roots celebration. Celebrate this official Star Wars Day with the Detroit Symphony Orchestra and special guest conductor Daniel Brier as they shine a light on the music of the film empire, performing John William's timeless themes for favorite characters good, bad and robotic!