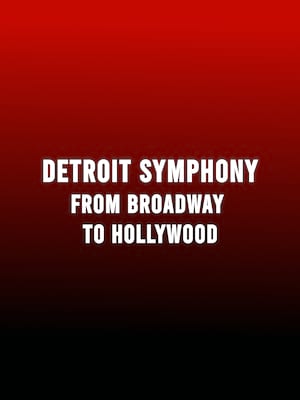 Bufford is a natural performer, confident and comfortable on stage in a way that makes it seem like she was born to entertain

Why See Detroit Symphony Orchestra - From Broadway To Hollywood?

Detroit Symphony Orchestra presents a magnificent program of hits from the musicals on February 28th - March 1st, with the spectacular 'From Broadway To Hollywood' concert at Detroit's Orchestra Hall. The night features music which has delighted audiences both on Broadway and the big screen, as the orchestra plays through beloved numbers from West Side Story, Les Miserables, The Sound of Music, Chicago and more.

The performance features vocals from Blaine Krauss (as seen on Broadway in shows such as Kinky Boots and The Cher Show) and Carole J. Bufford, one of the New York jazz scene's most in-demand young vocalist. The guest conductor is Robert Bernhardt, who currently serves as Principal Pops director of both the Louisville Orchestra and Chattanooga Symphony.